This season spring malting varieties were planted in Colorado between March and April, which would be considered normal.  During the vegetative growth stage (April/May), the valley experienced more wind than normal, however, the barley crop was able to establish an adequate and healthy stand on most acres before progressing to stem elongation and flowering.  Monsoon season rains started earlier than in past years, with daily showers and moderate temperatures beginning in the month of July.  These cooler temps and additional moisture provided excellent conditions for grain fill – resulting in a peak yield environment for many producers.  Cool temps and near daily rain showers extended through the month of August, which pushed back the normal start of harvest approximately 2 weeks. The season produced record high individual yields for several Proximity producers, with several exceptional farms that averaged greater that 185 bu/ac on some fields.  The average yield across the 2022 Proximity producer group was 10% higher than in 2021.  With an extended harvest timeframe and some lodging the overall test weight recorded this year is down compared to the 2021 season, while protein levels are normal, averaging between 10.5% – 11.5%.

This season Proximity took steps to expand our role as a supply chain leader in finding new and improved barley genetics for producers in the Mountain West region.  Producers and customers who attended our Field Forward days in July saw a glimpse into the future of agronomic and malting potential from the world stage.  Genetics providers from the U.S., Germany, France, Canada, and the United Kingdom provided access to an elite group of the new malting lines that have been identified as “step-changes” in terms of their agronomic and malting performance.  Along with providing Proximity Malt first access to these new lines, collaborating genetics providers were able to gauge how their lines performed in the highest barley yielding environment in the U.S.

In the Mid-Atlantic region 80% of winter malting barley acres are planted in Maryland and Delaware, with additional acres in Pennsylvania, Virginia, and North Carolina.  Most of these acres were planted in October of 2021, beginning in NC and VA and moving north as corn and soybean harvest was completed.  Adequate Fall moisture allowed for the establishment of healthy stands across the whole of the growing region – providing sufficient vegetative growth before entering the winter vernalization period. A mild winter resulted in no recorded winter kill in any fields, with healthy plants transitioning into stem elongation in March and the first half of April.  Consistent moisture through these months produced what was described as the best crop in the past 2-3 seasons by many farmers.  Parts of the Mid-Atlantic region experienced a “freeze event” at the end of April during the flowering stage of some fields, which reduced yield significantly for several producers, reducing overall yield. Southern farms started harvest during the last week of May while northern farms completed harvest the last week of June – bookending the harvest season. Highest overall yields were recorded in the state of Maryland, with peak yielding fields approaching 115 bu/ac.  Protein levels ranged between 10.0% – 11.5%.  Test weight averaged 0.5lb/bu greater than the 2021 crop.

After two years of evaluation, we have decided to begin introducing a new 2row winter malting barley developed by Virginia Tech called Avalon.  With a significant variation in soil types across the DelMarVA region, managing consistent test weight has been an agronomic challenge in some production areas.  In both university and Proximity trials, Avalon has shown to be a “step change” agronomic improvement in the area of test weight, which will translate directly to an improvement in malting quality for our customers.

The USDA recently published it’s Small Grains summary for the 2022 year, which showed a significant improvement over the 2021 barley season.  The 2021 spring barley season was impacted by drought conditions and late harvest rain resulting in pre-harvest sprout which impacted the quality of an already smaller than average crop.

Idaho barley producers had a significant rebound from 2021 in terms of volume.  Collectively these producers recorded Idaho’s highest average barley yield ever in 2022, with an average of 111 bushels per acre.  While the majority of barley is spring planted in Idaho, the state also produced a successful winter barley crop this season.

While the yields were significantly improved over 2021, the Idaho Barley Commission reported some problems with quality on a small percentage of acres.  High temperatures during grain fill impacted some acres which can lead to elevated protein content.  Some areas also were impacted with pre-harvest sprout, which can result when ripe fields are harvested well after they are ready due to late season rains.

According to a news release from the USDA, Montana barley acres planted increased 60,000 over the 2021 season to 1.03M acres – the highest planted acreage since 2003. 96% of these acres were harvested, similar to 2020 and 15% higher than 2021.  While planted acres were significantly higher this season, yields in Montana were similar to 2021, ending in a 40% increase in production over the 2021 crop, but a 30% overall decrease over 2020 production levels.

North Dakota planted acres, yield and overall production greatly improved over this season over 2021.  Planted acreage increased from 580K acres to 740K acres – an increase of 28%.  While some parts of ND had an extended harvest due to late season storms, the overall barley production for the state more than doubled in 2022 as compared to the 2021 crop, and was 66% higher than the 2020 season. 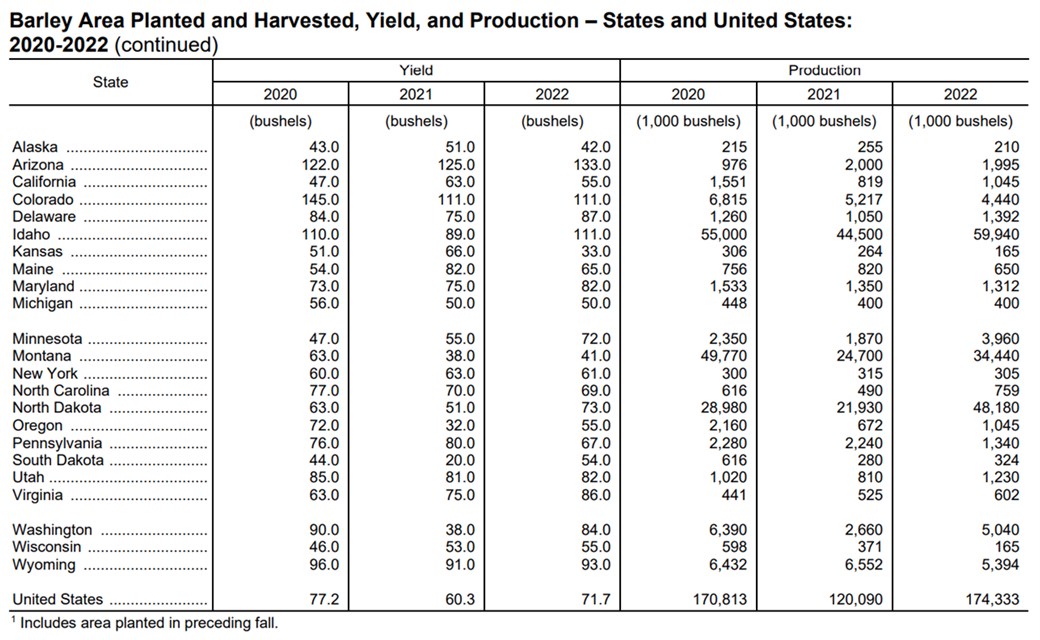 Reports from Statistics Canada have provided an outlook similar to what we’ve seen in the U.S. with regard to all crop production across the nation – a significant rebound from the drought conditions that were present in 2021.  The 2022 barley crop is anticipated to show a significant one-year increase in yield (59%) and overall production (35%), but a decrease of 15% in harvested acres.  In terms of volume, the anticipated 9.4 million metric tons of barley produced this season is 3% above the 5-year average, which saw production exceeding 10 million MTs in both 2019 and 2020.  Overall, the 2022 season is shaping up to be a story of 2 barley crops: high-quality barley that was harvested prior to extended summer rains and poor-quality barley that was unable to be harvested when ready.

Overall quality and yield of both winter and spring barley crops harvested in England and Scotland in 2022 have been reported as above average.  Winter barley harvest started earlier than usual based on historical trends, but maintained yield expectations and acceptable protein content for all malt distilling. Spring barley harvested was reported as having overall good quality for all malt distillers.

It has been reported that parts of the EU experienced drought conditions during stand establishment and grain fill growth stages of this year’s barley crop – which will have impacted both yield and quality on some level.  While much of the EU crop was above average, the overall yield anticipated from contributing countries like France, Poland and the Czech Republic are anticipated to be off the normal pace.

U.S. commodity markets have experience significant volatility for much of 2022, driven predominately by a war premium that started impacting markets in mid-February and peaked in late May.  While volatility in wheat markets has decreased since the start of July, the concern over drought conditions impacting planting in the Central Plains has been an additional factor maintaining volatility.

Malting barley demand / pricing is currently being impacted in part by wheat markets, but the carryover effect from a largely inadequate 2021 season is also playing a significant role in the U.S.  Combining a depleted overall volume of grain from 2021 season with questions around the open market availability of “good” barley from both U.S. and Canadian producers is likely putting a strain on overall efforts to re-establish a balance between supply and demand. It is anticipated that some level of volatility will continue through the 2022 year and possibly into 2023.